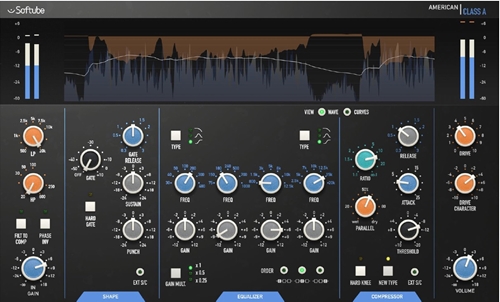 Gut-busting drums. Crackling, searing, face-melting guitars. Meaty, punching bass. Rich, up-front vocals. Wide-open, airy, living electronics. If you will it, it is no dream with the American Class A. Dream Big, Sound Bigger Based on the greatest classics of American mixing console hardware, this channel strip is fast and easy to work with, and brings a truckload of character to the party. With a shape section featuring gate and transient designing, a stellar four-band EQ with proportional Q and range control, a fascinating compressor design which can be switched between feedback and feed forward operations, and a warm, crunchy output drive section, no modern studio is complete until this sonic option is at hand. Along with the British Class A, the Summit Audio Grand Channel, and two SSL models (4000 E and 9000 K), the American Class A gives users of the award-winning Softube Console 1 hybrid hardware/software