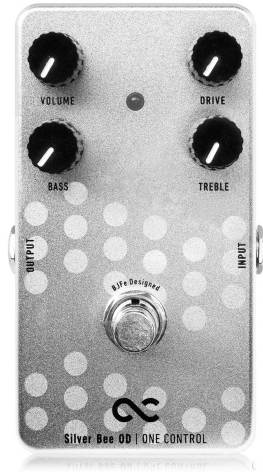 Tighter and more raw than a Honey Bee,  great clarity for both rhythm work and twangcrunch leads.

The overdrive amount can easily be adjusted from clean to overdrive with the touch on hand which also is a Honey Bee OD signature feature. The flat low-end and glassy top-end create tones that are characteristic of American combo amps.

While it has the same gain range as the Honey Bee OD, it is also the best tone for more modern rock, making a large modern-reissue-based American amp tone with a single coil or humbucker.

The two-band equalizer built into Silver Bee OD is widely controllable and gives you complete control over the timbre balance.

The TREBLE knob controls the brightness, high range and overtones of the tone. You can create a drive tone with a beautiful shimmering sound.

The bass knob is centered at the lo-mid and you can adjust the tone according to the characteristics of the stage, amp and guitar.

While highly dynamic overdrives may sometimes be difficult to play, Silver Bee OD has a strong presence in the tone itself so it creates a sound that is easy to play with controlled dynamics. The expressive power to control the tone is at your hand.