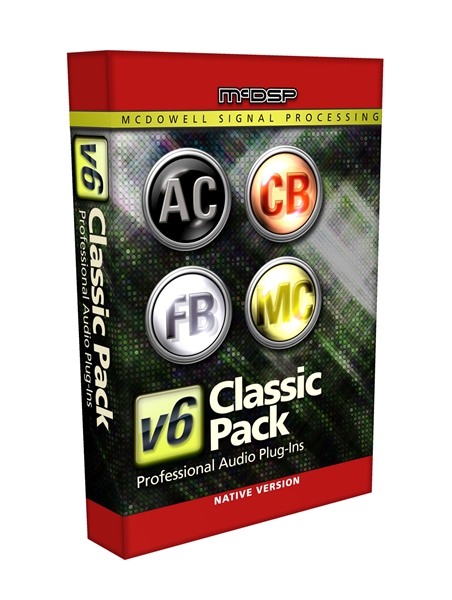 McDSP’s legendary emulations of vintage equalizers, compressors, tape machines and channel amplifiers are available together as the Classic Pack

The AC101 configuration acts as a digital pre-amp allowing even excessive amounts of gain without digital distortion. A drive control determines where the audio “sits” in the saturation/compression region, and even the attack and release times of the distortion character are adjustable.

The AC202 configuration emulates analog tape machines.  In addtiion to standard tape machine parameters such as bias, playback speed, and IEC1/2 equalization, AC202 offers controls well beyond the limits of the reel-world devices including adjustable low frequency roll off and head bump - independent of playback speed. The user can select from several playback head types, tape formulations, and even control the tape saturation recovery time.

In addition to the standard threshold and ratio controls, the actual shape and response of the compression curve can be adjusted with the Knee and BITE controls.  Flexible compression control is complimented with pre-filtering and post-compression EQ.

With its unique Peak, Slope, Dip controls and variable Q modes FilterBank can emulate any EQ, or be used to create a distinct custom EQ.