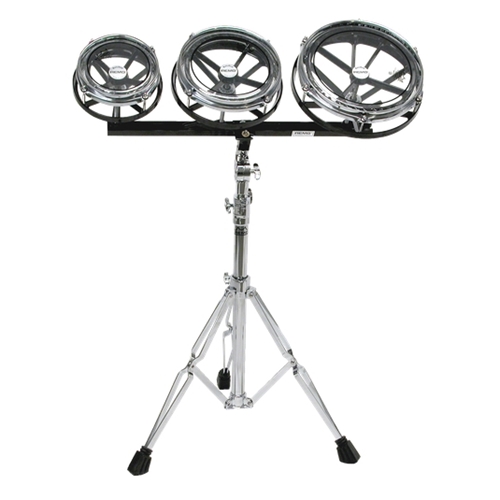 The Rototom Set is constructed with a rapid-tuning system, allowing for instant tuning in a range of more than one octave. The Rototom® Set does not have a traditional drum shell.
Instead, the drumhead and counterhoop are mounted on an aluminum frame (spoke) through which the tension rods are attached to a bottom frame which is mounted on a threaded center bolt.
Rotating the frame raises or lowers the tension, thus raising or lowering the pitch of the drum. Their Versa®tility has led to the widespread use of Rototom®s in live situations, recording studios, percussion ensembles and symphonic Concert music.
Rototom® Sets feature two or three Rototom®s mounted on a single stand for Versa®tility and convenience.