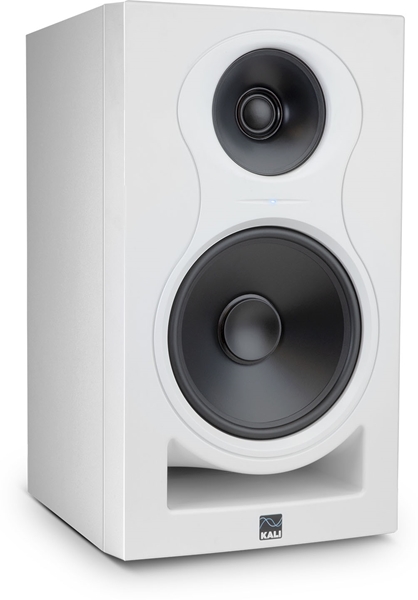 Kali’s IN-8 is one of the most innovative studio monitors ever made. Combining the natural advantages of a 3-way design with hyper-realistic imaging of a co-axial mid-range and tweeter, it offers more transparency, lower distortion, and a soundstage that must be heard to be believed.

The IN-8 Studio Monitor is a speaker like no other. Using the same woofer and tweeter from Kali’s celebrated LP-8, the IN-8 adds a midrange driver that surrounds the tweeter, and acts as its waveguide.

We know. We keep harping on about the "hyper-realistic" imaging of the IN-8. What does that mean?

The IN-8 solves this problem. The tweeter and midrange share an acoustic center, and the woofer is crossed over at 330 Hz, so the distance between the woofer and midrange is well under a quarter wavelength at the crossover point. This means that the IN-8 is acoustically a point source. As such, it has the same excellent directivity that the LP-6 and LP-8 have at their sides in a full 360 degrees around the speaker. You’re hearing all of the spatial information at the listening position, so the soundstage that you hear will have every detail that’s present in the mix.

The IN-8’s total harmonic distortion is less than 1.4%, which is exceptional. This is the result of unburdening both the woofer and the tweeter, so that both are doing less work. The woofer is crossed over at 330 Hz, a full 2.5 octaves lower than on the LP-8.

The tweeter is crossed over at 3000 Hz, nearly an octave higher than on the LP-8. Taking up the space in between in the hero of the IN-8 system: the 4-Inch, profile-optimized midrange driver. This driver has a lot of work to do. In addition to reproducing midrange frequencies, it also acts as the waveguide for the tweeter. This means that the shape needed to be precisely engineered to provide an ideal dispersion characteristic for the tweeter.

It also means that the midrange needs to stay still. In many other co-axial or concentric systems, high excursion from the larger driver causes intermodulation distortion, and degrades the accuracy of the system. The midrange on the IN-8 is limited to less than 1 millimeter peak excursion, making it acoustically stationary while still providing midrange to keep up with the powerful woofer and tweeter.

The LP-6 and LP-8 both feature balanced XLR and TRS inputs, and an unbalanced RCA input.