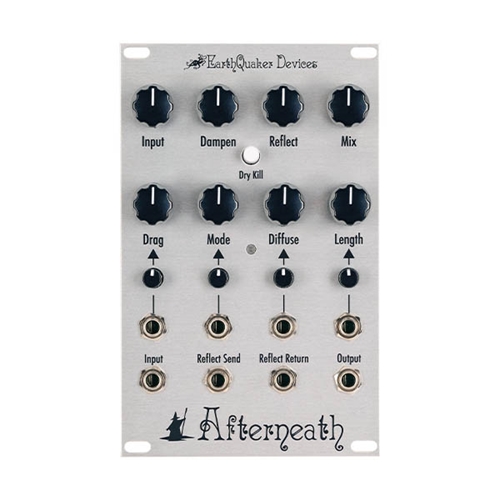 To celebrate the release of EarthQuaker Devices upcoming Afterneath Retrospective, they have created an extra special custom color Afterneath v3 pedal and Afterneath Eurorack Module available for a limited time only. The Afterneath Retrospective marks the fourth chapter in EQD's pedal documentary series, taking a deep and often hilarious dive into how some of their top-selling pedals came into existence.

The Afterneath Eurorack Module brings the otherworldly sounds from the effects pedal world right into your modular synthesizer. Featuring one main audio input, one main audio output, an audio send and return for the Reflect feedback path and nine controls, four of the Afterneath Module’s parameters are controllable via CV and each has been equipped with a dedicated inverting attenuator. With these features, a completely analog dry signal path and a totally digital wet signal path, the Afterneath Module is an ambient powerhouse and an instrument unto itself, helping to push the already unflappable Afterneath into a whole new realm.

Main Features:
• Special Custom Edition of the Afterneath Euro Rack Module
• In Celebration of the Afterneath Retrospective documentary
• Available for a limited time only
• Same otherworldly reverb algorithm built from an adjustable cluster of short delays in a 16HP Eurorack format
• Ranges from scattered individual delays to an immersive wash of atmospheric reverb
• New voltage control over the Drag parameter with 9 unique modes of user-selectable sweep:
Unquantized, Unquantized with Slew, Unquantized Volt/Octave, Chromatic, Major, Minor, Pentatonic, Octaves & Fifths, Octaves
• Features audio send and return for the Reflect feedback path
• Drag, Mode, Diffuse, and Length parameters are controllable via CV, each with dedicated inverting attenuators
• Features Dry Kill switch to eliminate the dry signal from the output, leaving only the wet signal
• Capable of pseudo-stereo operation by using the Reflect Send as an additional output
• All analog dry signal path and a totally digital effect signal path
• Current Draw: 95 mA from the +12v rail, 0 mA from both the -12v and +5v rails
• Width: 16HP

The Afterneath Module further expands upon EarthQuaker’s wildly popular Afterneath pedal with the addition of voltage control over the Diffuse, Length and Drag controls. We have also added an entirely new voltage-controlled “Mode” parameter that changes how the Drag responds to knob and CV changes. When adjusting the Drag via the knob or CV, you will notice a change in character, fidelity and decay length of the effect. There is also a noticeable change in pitch for the sound that is in the Afterneath’s buffer. As with the Afterneath pedal, high settings of the Reflect and Length controls result in self-oscillation, where the pitch of the oscillation is set by the Drag control. There are nine modes that govern the behavior of the Drag control and its effect on the pitch of the sound in the buffer: